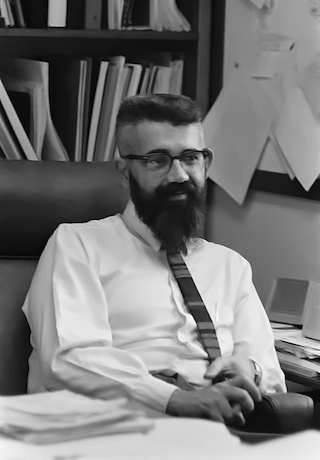 John McCarthy: Creator of the prefix-notation programming language Lisp and founder of AI.

John McCarthy was born in 1927, in the city of Boston. Due to difficulties finding work during the Great Depression, the family moved to New York, then finally settled in Los Angeles. Having established an early aptitude and proficiency in mathematics, McCarthy skipped two years of math upon his enrollment at Caltech. The year he received his undergraduate degree, he attended the 1948 Hixon Symposium on Cerebral Mechanisms in Behavior. The speakers at the symposium represented an intersection of mathematics, psychology, and the nascent field of computing science. 1

At the symposium John von Neumann presented his paper "The General and Logical Theory of Automata", 2 where he covered the following topics:

von Neumann's erudite tour de force stunned audience members as well as fellow presenters. 3 McCarthy was captivated. Now intrigued with the idea of developing machines that could think as people do, he was set upon the path which he would follow for the rest of his life.

McCarthy remained at Caltech for one year of grad school, but then pursed the remainder of his Ph.D. at Princeton, considered by him to be the greater institution for the study of mathematics. In a discussion with an enthusiastic von Neumann during a visit to Princeton Institute for Advanced Study, McCarthy shared his ideas about interacting finite automata – ideas inspired by von Neumann's talk at the Hixon Symposium. Though encouraged by von Neumann to write these ideas up in a paper, McCarthy never did. However, these thoughts continued to evolve over the course of the next 10 years and found their way – in modified form – to McCarthy's early AI papers and even Lisp itself.

After completing his Ph.D. dissertation, Claude Shannon invited McCarthy and his friend Marvin Minsky to work at Bell Labs in New Jersey for the summer. McCarthy and Shannon collaborated on assembling a volume of papers entitled "Automata Studies," thought ultimately a bit of a disappointment to McCarthy since so few submissions concerned the topic of his primary interest: machine intelligence. A few years later, he had the opportunity to address this by proposing a summer research project which he and the head of IBM's Information Research pitched to Shannon and Minsky. They agreed, and a year later held the first Artificial Intelligence workshop at the Dartmouth campus in New Hampshire.

It was here, thanks to Allen Newell and Herb Simon, that McCarthy was exposed to the idea of list processing for a "logical language" Newell and Simon were working on (later named IPL). McCarthy initially had high hopes for this effort but upon seeing that its implementation borrowed heavily from assembly, he gave up on it. That, in conjunction with his inability to gain any traction with the maintainers of FORTRAN for the support of recursion or conditionals, finally pushed him to create a language that suited his goals of exploring machine intelligence.

With the seeds of Lisp sown in 1956 at the workshop, it was two more years before development of the programming language began in earnest. In 1958 a special project was established to carry out Lisp development and AI work under the auspices of the MIT Research Laboratory of Electronics – which granted McCarthy and his team one room, one secretary, two programmers, a key punch and six grad students.4 The MIT AI project was founded and the work of creating Lisp had begun.

By the end of the year, the group had written – on paper – subroutines for reading and printing list structures as well as those to provide a Lisp environment. Over the course of a few months, these were then hand-compiled to SAP (SHARE assembly program), and eventually checked by running the SAP code on the IBM 704 which had been made available to MIT. 5, 6 Within a few years, Lisp had it's first interpreter (written in Lisp), and not too long after that saw the release of version 1.5 of the language.

At the 1980 Lisp conference held at Stanford, John McCarthy humorously commented on the previous two decades of Lisp's survival: 7

"On LISP's approximate 21st anniversary, no doubt something could be said about coming of age, but it seems doubtful that the normal life expectancy of a programming language is three score and ten. In fact, LISP seems to be the second oldest surviving programming language after Fortran, so maybe we should plan on holding one of these newspaper interviews in which grandpa is asked to what he attributes having lived to 100."

Lisp's 50th anniversary was celebrated in 2008, and despite the AI Winter of the 1990s, it shows no signs of disuse or senescence. Quite to the contrary, it continues to have a profound impact on multiple generations of computer programmers meeting all number and variation of needs.