An Interview with Robert Virding on Lisp 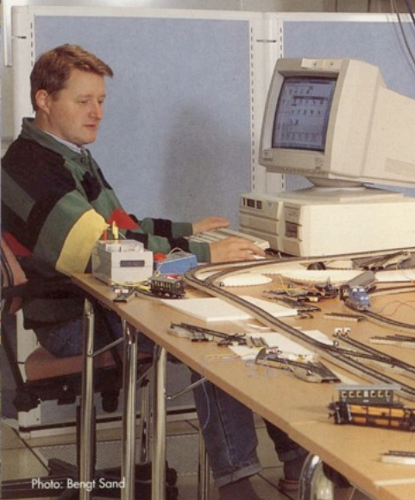 If you've been watching the LFE mail list closely, then you will have noticed that we're working on LFE's first book. That's super-exciting, but for a future post or two all of their own. Several months ago I was getting chapter 1 ready for the reviewers, and I needed some clarification on a few points from Robert Virding regarding some of LFE's historical details.

So I did what was natural: asked a bunch of completely unrelated questions! Well, to be honest, they were related tangentially and they helped put together a more complete picture of LFE's early history. It ended up being a bit of a mini-interview, and I enjoyed Robert's responses so much, I asked him if it was okay to share with the wider LFE community – he agreed and the plan was back-burnered for when I had a chance to create a post with the questions and answers.

Robert and I had a few more related conversations around the same time – I've taken a bit of artistic liberty in weaving the additional email conversations into a single narrative.

Duncan: When did you first encounter Lisp? Where were you working and/or going to school?

Robert: I first encountered Lisp somewhere around 1980-81. I was in the Physics department at Stockholm University and had started taking my PhD in theoretical physics there.

Duncan: What was your initial reaction to Lisp?

Robert: They were using it at the department for algebraic calculations in theoretical physics which is why I came into contact with it. I was (not yet) a part of that work so, while it was cool, I didn't really see the beauty of it right away. At that time I was doing programming of more "normal" types of applications, tools for student labs and micro-processor programming in labs, using more traditional languages like Pascal and various assemblers.

Duncan: What where the primary hurdles you had to overcome when initially learning Lisp?

Robert: My major difficulty was in grasping that the parentheses defined a data structure and were not just for grouping as in other languages. Why wasn't (foo (1) (2) (3)) the same as (foo 1 2 3). Once I got that, it was easy. The prefix notation was no problem as I had done some work with Forth (and had implemented one), so I was used to not having infix operators.

Duncan: What projects did you work on where Lisp was a major aspect of the work?

Robert: I didn't really use Lisp deeply at the Physics department. They had a VAX 780 running VMS and had Eunice, so I tested Franz Lisp. When I left and joined Ericsson they were also using Vax/VMS so I borrowed Eunice to continue with Lisp. I thought it would be interesting to see if I could port Franz Lisp to straight-VMS. It was much more UNIX/BSD dependent than I originally thought, which resulted in me having to implement more of BSD on top of VMS than I had planned. Maybe I can share those details with you later, they are not really interesting here, for this Lisp discussion. As far as I know no-one except me ever used it, but it did wonders for my C and understanding of how OSes work!

I did more work with Lisp when I was a member of the Computer Science Lab in Ericsson where we were looking at various ways of implementing telecom applications. Lisp was one the languages we were investigating, and as part of that work I studied implementing Lisps. I also implemented the Lisp Machine Flavors system as a study of implementing a relatively complex system in and on Lisp … and for the fun of it as well.

We later moved on to look at logic languages and these became the base on which Erlang was built, even though Erlang itself became functional.

Duncan: Can you tell me more about the Flavors project?

Robert: Well, it's probably not well-known that the name LFE – Lisp Flavoured Erlang – was partly inspired by the work I did on porting Flavors to VMS, with the spelling changed to the English "Flavours" as a joke.

Duncan: Were you using an LMI Lambda? If it wasn't a Symbolics machine, then it probably wasn't ZetaLisp … so were you using the Maclisp-derived Lisp for the Lambda?

Robert: No, it was other way around. I was using PSL (Portable Standard Lisp) from Utah which was quite a good Lisp implementation running on UNIX, amongst other systems. I had heard about Flavors and thought it would be interesting, and fun, to see if I could implement it on PSL. I managed to get hold of the Lisp Machine Flavors documentation and got going.

Flavors was an extremely feature-filled system; someone had really gone to town with it. It had multiple inheritance, mix-in flavors, before and after handlers, and wrapper macros. It also had a set of rules describing which were to be called and when. It was wonderful. Fortunately, Flavors had a few features which made it easier. For example, there was an explicit send function so I didn't need to hack PSL itself.

All in all, it worked. But I never really had a proper use-case. Unfortunately, I think the code has disappeared – at least, I haven't been able to find it. It would almost be doable on LFE except for updating object state; you would have to modify it to return the new object instead. Or use processes, but then they may be a little heavy.

Duncan: After gaining experience in school and work with Lisp, what features did you feel made Lisp an excellent tool or even just fun to work with?

Robert: I liked working with functional languages and I found Lisp to be very versatile when building systems. The combination of functions and macros – and the homoiconicity which makes working with macros easy – makes Lisp a very powerful tool. This makes Lisp and the concurrency from Erlang a very good combination. One wonders how it would have gone if we had used Lisp as a base for Erlang.

Robert: In addition to the work on the parallel programming languages, I did a number of implementations of Erlang to study different techniques as well as to study the possibilities of using different memory management and garbage collection mechanisms like reference-counting and a real-time copying collector. These presented no significant benefit over the separate-process-heap model used in the "standard" Erlang implementations, so the work was discontinued.

I did some work with the BEAM implementation, amongst other things, the compiler, and also parts of the basic system.

Duncan: Coming back to the parallel programming, I saw a reference to the 1986 paper you co-authored, entitled The Phoning Philosopher's Problem or Logic Programming for Telecommunications Applications, where Parlog was used to create what looked like an Erlang prototype. Was this the first version of Erlang?

Robert: No, the Erlang language did not exist in 1986; using the name "Erlang" pre-dates the current Erlang language. The 1986 paper was describing a language/system based on concurrent logic which we called "Erlang". It was mainly done by a guy called Nabiel Elshiewy and myself. Actually this path was abandoned and has nothing to do modern Erlang. Which I think is a great shame, as I liked the concurrent logic languages. I still do.

Work on what became Erlang didn't really start until '87/'88. Before that almost all the members of the lab had written telecom applications in a variety of languages and systems – basically everything that ran on BSD or UNIX – to experiment with ways of solving the problem.