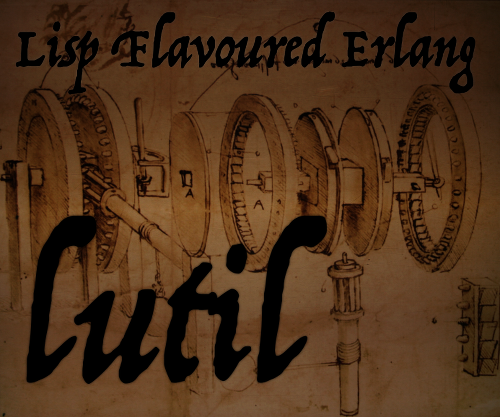 With the release of lutil 0.5.0, there are new "compose" functions accompanying the previously-merged thrushing macros as well as a new convenience include file which contains all of lutil's predicate functions defined for easy use in the REPL or in modules. Additionally there is a new, experimental include file that is beginning to define functions and macros considered "core" to the LFE experience but which aren't yet (and may never be) included in LFE-proper. Some of these may wrap Erlang functions with more options, others may provide new syntax, etc. See below for usage examples.

Be warned! This is for experimentation! Do not depend upon these functions remaining here in perpetuity.

This is a new include file while is the home for any functions that feel like they should be part of the language. They might wrap Erlang functions or provide basic functionality that's not in Erlang or LFE proper.

For now, it's just the following:

Let's start with pulling in the core include in the LFE REPL:

Erlang doesn't have a lists:seq/1, so we made one:

Having done that, we also provided wrappers for Erlang's lists:seq/2 and lists:seq/3.

As you can see, we opted for 1 as the default starting element. This follows in the tradition of many of Erlang's lists functions. 0-based sequences can just use seq/2, e.g. (seq 0 10).

These functions were inspired by Clojure's range function as well as Python generators. Our range provides us with the ability to generate an endless series of integers or floating point numbers without using more memory that what is required to create a few functions.

Unlike Python and Clojure, range is based upon Erlang's capacity for its own brand of lazy evaluation as demonstrated in this blog post. In particular, (range) returns a function (and so is more akin to Python's generators that Clojure's range function). When called, it will return a cons of:

The range function is actually a special case of the more general next function in lutil core. More on that below.

For range to be very useful, we need be able to pull values from it. Otherwise, we're left with usage like the following:

That certainly has its own peculiar charm, but does not rate too highly in convenience. As such, a function like Clojure's take has been added to lutil core. It does just what is says: takes a certain number of elements from our infinite series.

Hej! That's much nicer than the above :-)

Sometimes one's code will be using both infinite series as well as definite lists and it would be nice to not have to change functions if the source of the data changes. As such, we've modified take to provide a wrapper for lists:sublist/2:

Note that the take wrapper swaps the positions of the arguments so that it may be used with the ->> macro. If you need to take from a list with the -> macro, you will need to use lists:sublist/2. (Be sure to see the section below for usage examples of -> and ->>!)

We also added the following, as it ended up being useful:

One last point on take: it is not based upon an element value, but rather the length of the accumulator. If you have use cases where you need to only take elements up to a certain value, let us know and we can generalize this further (also: patches welcome!).

Under the hood, the range function actually wraps the next function. next is a more general form that will repeatedly call a user-provided 2-arity function. In the case of range, that function is addition.

For example, the following are identical:

You may use next directly to define your own infinite sequences. Here are a few examples:

This set of changes (and examples) is the most tame of the bunch. lutil has implemented several predicates of the form name? for the past while.

As projects have started to rely upon these more heavily, it seemed prudent to provide the increasingly-more-used predicates in include-form (thus alleviating developers having to use the full mod:fun syntax or from complicated and hard-to-maintain special imports).

Here's a quick way of seeing which predicates are supported:

Now we can see the functions available in our REPL environment that were brought in from include-lib:

You can use the predicates include from the REPL or in modules with the usual include-lib call, as above.

All of the 0.5.0 changes detailed above were actually yak-shavings in support of the compose functions. These new functions have been added as companions to the threshing macros (see below). These are similar to Clojure's compose function, but with some syntactic sugar to assist with the fact that LFE is a Lisp-2.

Pull in the functions:

Now let's use compose/1 on a list of functions:

Here is compose being used in a filter:

Unlike schemes and Clojure, when calling compose directly, we can't just wrap parens around our function – we need to call funcall on it. But we can cheat, with a little help from Erlang arities :-)

The following are provided as conveniences when using compose by itself (in other words, not in a call to lists:map, lists:filter, a predicate, etc.):

The following examples are for functionality that was previously added to lutil, authored originally by Tim Dysinger. Though not part of this release, these bonus usage examples are provided since it's such a cool set of macros, inspired by their Clojure analogs -> and -> >.

Reading (and sometimes writing) deeply nested functions can be a bit awkward:

This may seem like a contrived example (and well, yes, it is), but there are use cases where this comes up. In particular, the world of web application middleware where code is run between request and response one can get large stacks of nested functions.

Here's how the first thrushing macro can help the previous example:

What's happening here is that the output from one function is passed as (inserted, really) the first argument in the next function.

The next macro does the opposite …

Let's get some includes:

Next let's make a bunch of nested calls:

And now let's rewrite the nested functions using the ->> macro:

As promised, ->> does the opposite of -> in that the output from one function is appended to the arguments for the next call. In other words, the output of the previous call is the last argument in the next call.